Captive breeding is our priority at Minibeast Wildlife.

There are several advantages of obtaining invertebrates bred in captivity.

Although many species of invertebrates are in plentiful numbers in the wild, some are not. Many we simply don't know enough about.

Australian tarantulas and some scorpions are being collected in large numbers from relatively localised populations. This may have devastating long term effects on these species in the wild.

Minibeast Wildlife does not sell adult tarantulas - all tarantulas sold through our Bugshop are young captive bred spiders as part of our Ethical Breeding Program. Unfortunately many adult Australian tarantulas for sale at present in Australian pet shops have been taken directly from the wild, are of an unknown age and often in poor condition. More information about the sale of Australian tarantulas can be found here. 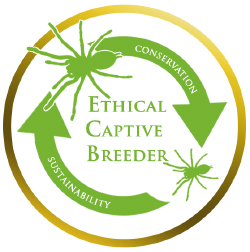 Some scorpions are particularly vulnerable to over collection due to their long life-cycle and the ease in which they can be found. This particularly applies to species in the genus Urodacus. For example the Black Rock Scorpion (Urodacus manicatus) is being collected and sold in large numbers in eastern Australia. These scorpions take several years to mature, and have a gestation period of 16 months. They live under granite rocks, and commercial collectors often take large numbers (all they can find) from one area in a very short period of time. Taking a large percentage of adults from such a population may have significant effects on the future survival of these scorpions in such an area. Also significant habitat damage is sometimes occurring by rocks being flipped over in the search for scorpions and not being replaced. If you see adult Black Rock Scorpions for sale in pet shops there is a very good chance they have been taken from the wild.

It would be a great shame if the very people fascinated by these animals were to contribute to their demise by supporting the mass wild collection of some invertebrates.

There are no products listed under this category.